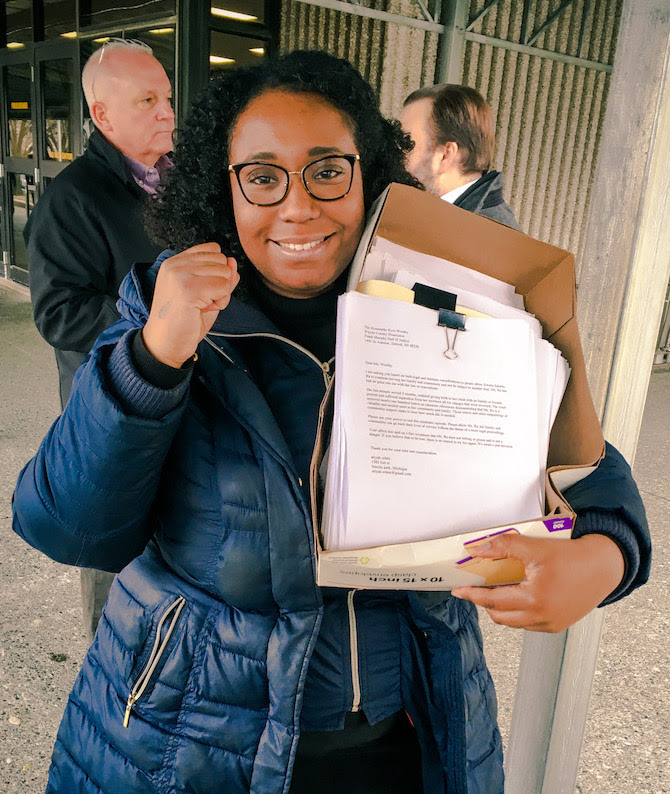 Due to the changes we’ve had to make in our schedule and the print issue, Riverwise is only now making this vital announcement to our readers. But it’s never too late to share the victories that give us hope and strength. We have followed Siwatu’s case ever since she and her family were forced to brave the injustice of her incarceration. Her subsequent release is a blessing which bolsters the ongoing movement for the abolition of our prison system. We thank Siwatu, the Salama-Ra family, and the Siwatu Freedom Team.

Siwatu-Salama Ra is free. Siwatu’s nearly three year ordeal through the legal system ended January 31st, 2020.  After having virtually no choice but to plead “no contest” to charges reduced from felony to misdemeanor in order to stay with her family and community, Siwatu was sentenced to “time served.”  She vows to continue the fight for others who are still being criminalized. Standing before Judge Donald Knapp, Siwatu said:

“After 2½ years, I have seen firsthand how people have come into this courthouse and have had to make very difficult decisions such as this one just to stay home with their families ... the people who stand beside me dedicate our lives to change that.”

After the release hearing, Siwatu and the Freedom Team gathered outside the Frank Murphy Hall of Justice. She told the crowd of supporters, “I, and so many others, are living examples of how prosecutors weaponize felony firearm and other heightened charges in order to corner people into taking plea deals, regardless of their innocence. This vicious system must come to an end, and we have to do the work.”

Siwatu organizes with the help of the Freedom Team, which functions as a participatory defense committee and visionary project that connects Prison Abolition, Environmental Justice and Climate Justice.

The Freedom Team worked alongside American Friends Service Committee’s Michigan Criminal Justice Program, Michigan State Senator Erika Geiss, Mothering Justice, and many others as part of a coalition to introduce legislation that creates better standards of care for incarcerated pregnant people, as well as oversight to protect all people imprisoned inside the Women’s Huron Valley Correctional Facility. With thousands of people inside prisons and jails vulnerable to the covid-19 pandemic, this work is critical.

At the introduction of the bills at Michigan’s Capitol building in February, Siwatu shared these words:

“What if I had been allowed to have my loved ones present with me while I gave birth? What if we lived in a world where it was forbidden to have armed officers anywhere near a person giving birth, let alone in the birthing room?

What if the prison officials had actually said yes, yes you can breastfeed your brand new baby, instead of giving me a resounding no and all of the other women at the prison were told NO too.

In the meantime, we will fight to make sure pregnant people and all people housed at Huron Valley are treated with respect and care. There is so much more to fight for to end these horrific conditions, and until we abolish the entire prison industrial complex we will work towards a system of love and care.”

— Siwatu and the Freedom Team

You can learn more about the bills and support this work at www.AFSC.org/kites and www.FreeSiwatu.org .