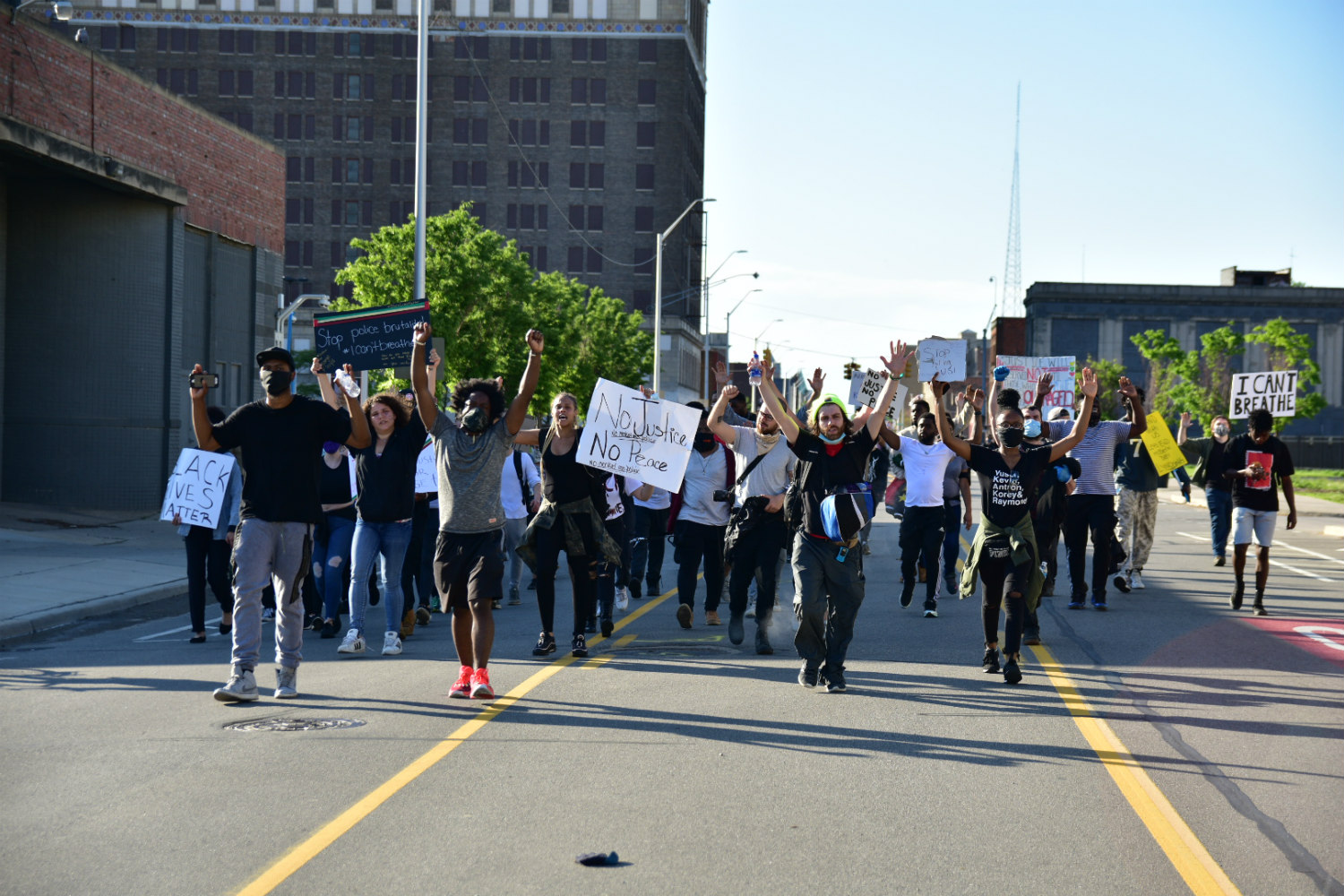 The daily protest demonstrations against police brutality in Detroit have been relatively peaceful. Yet, until yesterday, police response has been extremely antagonistic. Nearly 150 protesters were arrested and charged with breaking curfew during the June 2 march alone. At least one protest organizer was charged with the felony of inciting a riot, though he has since been released and the charges dropped. Recent protests, occurring in similar numbers across the country, are an indication that current events have heightened our political consciousness so that many of us are directly confronting state power and white supremacy. Are we ready to struggle for a real and lasting change to the current systems of oppression? Can system-change blossom from the energy and awareness generated from sustained protest? Recent local and nationwide actions indicate, yes— we must engage in the work of uprooting white supremacy from the police force, with the longer-term goal of policing our own communities.

The Detroit Police Department, along with many municipal law enforcement agencies across the nation, has spoken out against the murder of George Floyd, racism, and police brutality. But the rhetoric must be contested by our continued call for action that addresses the systemic nature of state-sponsored brutality in Black communities. We’ve heard the promises many times before.

Meanwhile, police forces, though lenient at times, are disrupting largely peaceful protests and the emerging democratic process. The City of Detroit has engaged with, and allowed, these protests to manifest, but only up to a certain point, after which the arrests have been swift. We must not allow the repression of the community consciousness that forms around collective action like street protests. This time around we are experiencing a confluence of crises that have plummeted the most vulnerable of our people into despair and suffering. We continue to mourn and seek clarity during these unsettling times when many folks are wondering, what comes next?

In Detroit, protest actions that occurred over the weekend and into this week were preceded by constructive dialogues around safety, tactics, and strategies for dealing with police retaliation. Participants of the marches discussed issues like the march route and how to deal with inevitable confrontation with police forces. But they also deliberated the greater issues of system change and building community as defenses against future injustice. They drafted a list of demands that would move us toward conciliation and justice in the short term— such as the arrests of Minneapolis police officers that participated in George Floyd's murder; the release of all peaceful protesters; and the breaking of an unconstitutional curfew. The pre-march meetings on the lawn of the Detroit Public Safety Headquarters reflect the emergence of a wider visionary political space— the type of space we should cultivate in the long term.

This is part of our struggle against a system of law enforcement that has executed yet another Black man in broad daylight. Since the inception of this so-called great nation, the police system has rarely fulfilled its presumed role as a benevolent force when it comes to Black folks; it has methodically abused, tortured, imprisoned, and killed Black men and women. It’s a system that creates people who might kneel on an already-incapacitated man's neck until his breath is gone, looking directly into a camera with confidence, triumph, and intent. That knowing look dares us to find a way to create an inclusive, democratic society, and to dismantle systems of white supremacy, patriarchy, and police brutality toward Black bodies. Protestors on the streets of Detroit are showing us one possible route.