Beyond Policing To Community Peacekeeping

Throughout this extended season of crises and mourning, activists nationwide have intensified our thinking about dismantling unjust systems. In addition to coping with the cumulative challenges of a worldwide pandemic, racist police brutality, and increasing economic inequity, many are seeing this as a time to address, head-on, the root causes of the social injustices that have been laid bare. We’re protesting not only the systems that have fostered these injustices but the ideological assumptions that undergird systems of white supremacy and racism.

In this special Autumn 2020 edition of Riverwise, we take a closer look at community responses to police brutality, and the areas where sustained, unapologetic, protest actions are demanding real change. These actions are moving us closer to our vision of community safety and peace.

The coalition led by Breathe Free Detroit has been marching and rallying in the streets of Detroit, daily, for over 130 days now.  This youth-led, multi-racial coalition continues to rally in the streets against police brutality and anti-blackness, and for a city budget that reduces Detroit police funding while emphasizing community services. Such nationwide calls to reallocate cities’ financial resources have spurred a new stage in the movement to liberate Black, Brown, Indigenous, and all working folk.

Here in Detroit, urged on by grassroots social justice organizations and residents, members of Detroit City Council have proposed the Detroiters’ Bill of Rights, a comprehensive amendment to the Detroit Charter. This call to reshape the city’s constitution is an indication that we have the potential to implement policy based on community rights. Additionally, organizations like Greenlight Black Futures, the Coalition for a People’s Budget, Frontline Detroit, Detroit Will Breathe, and the Coalition for Police Transparency and Accountability have joined the fight for racial justice most recently uplifted by the Black Lives Matter Movement/ Movement 4 Black Lives. These groups have placed new urgency on ensuring that this moment of wide-scale political uprising does not pass without achieving our truly transformative social justice goals.

But are we in a stage of the liberation movement where we are ready to assume responsibility for a radical transformation in the ways we maintain peace in our communities? For answers, we can look to recent history and previous initiatives for community control over neighborhood safety. 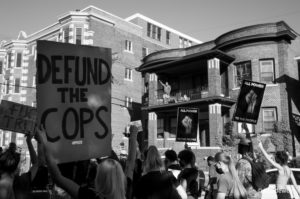 Members of the Black Panther Party realized that fundamental to community peacekeeping is access to basic human needs— water, food, housing, mental and physical health services, and effective education. They developed programs to respond to these needs, and before their untimely demise due to ongoing state violence against their Party— including assassination of their leaders— they were setting examples that would have moved the communities where they worked toward self-determination such that safety and security would be maintained.

In an effort to reduce incidents of police violence against citizens, the Detroit Coalition Against Police Brutality (DCAPB) proposed neighborhood Peace Zones.

Starting in the 1990s, members of DCAPB urged communities to set up their own spaces and practices for resolving conflict in order not to call for interventions by police, which almost always resulted in escalation of violence rather than resolution. Though DCAPB demanded Detroit Police Department reforms that might have mitigated hostile relations between the department and the community, these demands for reform were never met.  In retrospect, after decades of movement efforts to humanize policing, it is clear that hopes for “reform” of policing as we have known it for so long were futile.  The fact that the reforms demanded so many years ago have yet to be enacted in U.S. police departments explains the current wide acceptance of abolitionist ideas,  as people come to recognize how intransigent and inhumane instruments of state violence are. 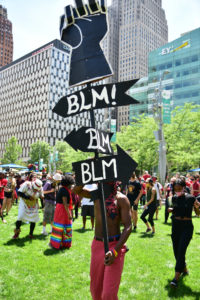 In fact, 2020 has seen activists expanding upon a long legacy of abolition, in the streets, and in intellectual circles. In the wake of the brutal murder of George Floyd, the idea that abolition is a political action needed to end state violence against citizens is gaining more and more traction.

In a pre-revolutionary stage, a concept as simple as a green chair can transform our thinking on policing— from punishment and retribution to restoration and rehabilitation; from militarized police response and surveillance to communal conflict-resolution; from fear of the unknown to building of healthy, neighborhood relationships. The Green Chairs, Not Green Lights (GCNGL) initiative offers more spaces in our neighborhoods in which to engage with each other over these issues. We are invited to sit with neighbors and examine community safety through face-to-face relationships rather than facial recognition technology.

The July 10 killing of Hakim Littleton has heightened the urgency of deepening our analysis of police violence. Police could have saved Hakim’s life, but have been trained to take it. What would a world where public safety was not conflated with policing look like? Would it end the desperation that many young people feel in this current moment? It is urgent that we interrogate these questions and heed the call to defend Black lives. Generations ahead of us depend on it. 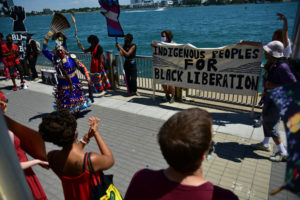 Americans are increasingly ready for radical changes to the unjust systems that oppress Black lives and spirits. The movement to dismantle white supremacist institutions is growing stronger, especially at the grassroots. It is here where creative organizing for systemic change is thriving, as young African Americans reach beyond electoral politics, beyond the rhetoric of liberalism. Ongoing street protests are creating opportunities for political growth and a new unity based on wider visions of justice, safety, and joy.