Thank you for all the things that you do.

I just wanted to say thank you!  Your freshwater and saltwater components both play crucial roles to filter, feed and hydrate the soil, animals, humans, and weather that controls the climate on earth. Water gives me hope, joy, and energy.  Mni wiconi (Water is life)!! 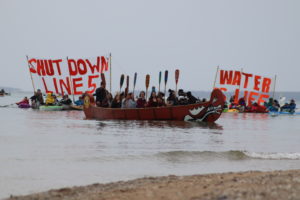 One of the largest inland oil spills in our nation’s history happened in July 2010 when Enbridge’s oil line 6B ruptured and dumped over a million gallons of tar sands crude oil into Talmadge Creek, a small tributary to the Kalamazoo River near Marshall, Michigan. Thousands of animals and fish died. People got very sick, many never recovered, some died. To this day, Enbridge still has was never been able to clean up line 6B oil spill.

People from all over Michigan have been demanding Enbridge’s Line 5 be shut down for years. And for most of that time, those calls fell on deaf ears. However, in November of 2020, responding to the overwhelming demands of organizers and citizens across the state, Governor Whitmer and Attorney General Dana Nessel announced that the State of Michigan would revoke and terminate Enbridge’s line 5 easement through the Great Lakes. This move was aimed at protecting the Public Trust Law and the water in our precious state from a catastrophic tar sands oil spill like the one in Kalamazoo.

Line 5 pumps the world’s dirtiest oil (tar sands) through 70 different Michigan tributaries as it makes its way to the Detroit Marathon refinery.  So in addition to the threats that the pipeline poses to our fresh water in Michigan, it also leads directly to the poisoning of many of our people in the city. Marathon’s massive refinery is located in SW Detroit,  48217. This area has been scientifically determined to be the most polluted zip code in Michigan. Largely a black and brown community the people in 48217 get sick at higher rates, often can’t sell their homes because of the pollution, and live in what one former resident who organized against the refinery calls a “sacrifice zone.” A place where people are left to die in the shadows of the industrial pollution that allows everyone else to continue living their lives without bearing the brunt of its repercussions. 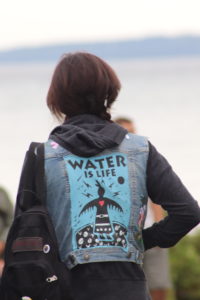 A spill at any point on line 5’s route into any of the tributaries would be devastating to all of Michigan. Enbridge was supposed to shut down on May 12, 2021, based on the governor’s order, but they have refused to stop transporting tar sands oil. So, just as they have always done, indigenous leaders and other water protectors have continued to organize actions and protests throughout 2021. The most recent of these was held on September 4, 2021, when hundreds of people gathered in Mackinaw City to show that love is stronger than greed and to demand Line 5 be shut down permanently.

It is over Enbridge. You have been served eviction papers. WE don’t need your dirty oil. WE have a vision for the future and you are not in it.