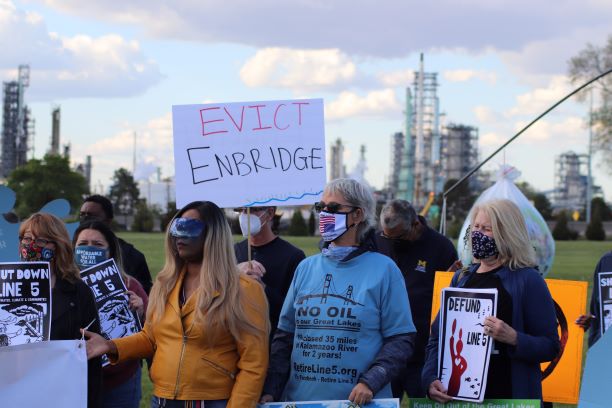 We arrived late in the evening on the 12th of May in Mackinaw City. Events to shut down line 5 were already underway. We had driven from the Marathon oil refinery in Detroit after holding a solidarity rally and press conference to demand line 5 be decommissioned and Enbridge be evicted there as well.  Line 5 crosses/threatens 70 tributaries throughout Michigan on its way to Marathon in Detroit where the community that lives there dies a slow death because of the toxins in the air and soil. The folks that live in the shadows of the refinery duct tape their windows at night and have to sleep with masks on. They can’t open their windows when it’s hot in the summer without getting sick.  Mothers don’t feel safe letting their children go out to play.

In November 2020 Michigan Governor Gretchen Whitmer revoked Enbridge’s easement that had allowed the line to operate since 1953 with the support of Michigan Attorney General Dana Nessle. It is a welcomed fight. Indigenous people and activists from all over Michigan have been fighting to have line 5 shut down for years.

When we got to McGulpin Point, the site of the line 5 pumping station early in the morning on May 13th hundreds of people were already there.  Many held signs that said EVICT ENBRIDGE! An eviction notice had been written up and we were all going to deliver it. I cried at the sight of so many people that were gathered. I (and so many others) have been fighting line 5 since 2013 and to finally have so many people demanding it be shut down was truly emotional for me. It warmed my heart and gave me so much hope.  Something a lot of us have lost in the last few years.

Winona LaDuke and the indigenous folks fighting to stop Enbridge line 3 came to show solidarity and to share strength. We are all in this together. It is going to take all of us to protect the Great Lakes. Late in the evening on the 13th Winona LaDuke gave a profound speech. She said that this is the end of the fossil fuel era and that the party was over for the oil and gas economy.  She said, “Let’s doula a new green economy together.”  I think of these words daily, manifesting them, dreaming of a beautiful new future for my children and grandchildren.

We are all knee-deep in late-stage capitalism, climate change, and uncertainty. We are left with no choice but to come together, by any means necessary, to fight for and birth a new system. Founder of the Michigan Anishinaabek Caucus, Andrea Pierce, said it is our duty to protect the Great Lakes for seven generations ahead. She said, “we are all water and water is a living being.”  When we really start to see water as a living being that has to be protected by us all we will have finally evolved to a place where we can imagine a future for everyone and have the will to create it.