Work to shut down the Detroit trash incinerator- at one point, the largest in the world- began even before the monstrosity was built. Three decades, and at least three campaigns later, Detroiters managed to end the fiasco of burning garbage and breathing toxins in exchange for profit from dirty energy. Many things changed over that 30-year period- elected leaders, appointed decision makers, the money – made by burning garbage, and, most importantly (in my view), who got involved, how many got involved and the strategies they used to sway elected officials, appointed decision makers, and corporate actors.

Clearly, an effort that takes more than a generation to reach its goal involves many people and multiple phases. There’s likely no way to figure out how many people were involved, and I am bound to miss naming some key players, but it’s fair to say there were basically three different phases.

Despite the ironic subtitle above, the role of anarchists, and especially women aligned with the anarchist movement in working to raise awareness and get the incinerator shut down can’t be overstated.. Laurie LePain (now Kopack) and Kathy Rashid initiated some of the first meetings on the incinerator when construction was announced. They got elected officials in Lansing to send the Department of Natural Resources to meet in Detroit regarding the incinerator.

Rashid was instrumental in organizing “No Borders”- a US/Canadian event to protest the incinerator with poetry-where I read for the first time in public. One of the other poets, Detroit cultural icon Ron Allen, told me about a march/protest at the construction site of the incinerator. We were among the very few Black faces at the event organized by folks in the orbit of the radical publication, the Fifth Estate. Many were anarchists, and most were white.

They were really the tip of the spear when it came to warning us all that it was a significantly bad idea to burn massive amounts of garbage and spew the toxic smoke into the air, especially in the middle of an urban area near an elementary school and the Eastern Market- the largest open air farmer’s market in Michigan. They said repeatedly that such a polluting health hazard would never be built in a wealthy white community.

But the neighborhood where the incinerator was being constructed, like the rest of Detroit, was majority Black with its first and still very popular Black mayor, Coleman A. Young. I personally was thankful for Young having integrated the Detroit Police Department with more Black people and more women. There were still issues, to be sure, but harassment was a far cry from the days when the notorious undercover cops of Stop Robberies Enjoy Safe Streets (STRESS) terrorized the streets. Young had kept his campaign promise to disband STRESS.

The Roots of “Detroit vs. Everybody”

The 1980s was a time of financial austerity and angst-filled flux for many Black urban centers, and Detroit could have been the poster child. The domestic auto industry downturn had worsened and the systemically racist denial of federal funds from Lansing along with drops in the population and tax base consistently strangled the local economy. In addition, the arson of “Devil’s Night” around Halloween and high rates of violent crime lead to a tragic battle between Detroit and Atlanta for which city would hold the title of  “murder capital of the US.” Criticism of Young, including his construction of the incinerator, was often seen as a put-down of the already beleaguered, mostly Black residents of the city. This lead to a situation in which many residents were unwilling to engage the effort for the right to clean air, so as not to seem to be piling on to the attacks on the city which they also loved.

The stats on Detroit’s asthma epidemic weren’t yet common knowledge. Moreover, when the protests began, the incinerator was an abstraction, not yet built, and thus largely only a concern to activists in general, and environmental activists in particular.

Most media coverage at the time largely focused on City Council hearings where state and federal regulators opposed the incinerator building permit and members of Greenpeace unfurled huge, multi-story banners at the incinerator construction site that read “Ban the Burn.” Local activists protests, leaflets, arrests by the dozens, and a “die-in” at city hall, was covered mainly in the Fifth Estate and other radical mags and documented by photographer Millard Berry.

Ralph and Alan Franklin, Kathy, Marilynn and Kevin Rashid, along with Carol Izant, David Watson, Ceil Aitchison and Tom Stephens were just a few of the activists I knew or would soon meet who were working against the incinerator in the context of the Evergreen Alliance and/or Women Empowered Against Violence to the Environment (WEAVE) which organized all women protests one of which coincidentally happened June 4, 1989 the same day as China’s Tiananmen Square Protest and Massacre.

Zero Waste Detroit (ZWD) represented the next phase in the battle to keep nitrogen oxides, sulfur dioxide, mercury, lead, dioxins and other poisons out of Detroiter’s lungs and bodies. The roots of the org go back to the 1990s with Rosedale Recycles. When I worked with ZWD the main folks were Margaret Weber, Sandra Turner-Handy, Ahmina Maxey, and Galen Hardy. They were going to block clubs, community groups and City Council, spreading the gospel of recycling.  Their message was that there is an alternate way to deal with trash besides turning it into public poison. This was an effort at grassroots organizing and awareness raising about the environment that folks could wrap their minds around. Their work bore fruit in 2013 when the City of Detroit finally took up curbside recycling.

The idea was to promote recycling to keep as much garbage as possible out of the incinerator. This could also help change residents’ mindset about garbage, to introduce the concept that trash is never actually thrown “away.” It doesn’t go to the Moon or disappear; it stays with us in one form or another. So, the best thing to do is to avoid creating garbage in the first place: repair, reuse, and recycle. This view overlapped with those of the anarchists who were a part of the Fifth Estate. It underscored the idea that the system was fundamentally flawed, as the creation and disposal of garbage were both driven by corporate profit. ZWD took the specific starting point of starving the beast of fuel to make burning garbage economically untenable.

ZWD and environmental activist Brad van Guilder also did deep research into the local authorities charged with waste disposal such as the Greater Detroit Resource Recovery Authority (GDRRA) which was actually an impediment to shutting down the incinerator. ZWD kept tabs on which members of the Detroit City Council needed to or could be swayed on issues of environmental justice as well as tracked the various owner/operators of the facility once the city sold it off. All of these folks were plugged into the next and what turned out to be the final phase in the effort to shut down the Detroit Incinerator.

The group eventually chose the name “Breathe Free Detroit,” a name that reflected the positive outlook and aspirational goals of the campaign. The call to action to shut down the incinerator was paired with the right to breathe clean air and a just transition after the shutdown for the residents. This included calls for keeping housing prices the same and not falsely inflated by gentrification and finding the incinerator’s workers new jobs with the same pay and benefits.

Besides door knocking in the neighborhood to gather members and support, the group mounted a postcard campaign aimed at getting Mayor Mike Duggan to shut down the incinerator and eventually launched legal action through GLELC. Great Lakes Law also created The Detroit Incinerator Primer, a clear, concise and damning report that documented in one place the myriad toxins spewed from the stacks and the multiple violations of clean air regulations and health protections emanating from one spot. It also showed that most of the trash came from whiter, more affluent areas to be burned in and pollute mostly Black, lower income areas that bore all the burden of waste as a classic “sacrifice zone” of environmental racism.

Breathe Free held well attended townhall meetings where Detroiters were informed and encouraged by activists from Detroit and all over the country.

All of this was informed by power mapping and strategy sessions where members figured out how to best engage Detroiters to move decision makers to do the right thing and things were moving in our direction in terms of media attention. We mounted a campaign with posters of regulators to call when the air smelled bad. That prompted a lot of calls and Channel 4 covered the complaints. And WXYZ even showed up to ask questions at a neighborhood pizza party near the incinerator.

Those actions , along with the public presentation of nearly 15,000 postcards calling for Mayor Duggan to shut down the incinerator, were keys to victory. That press conference held outside the Coleman A. Young Municipal Center featured medical, legal and environmental advocates, and importantly folks from the neighborhood.  Each and every speaker reflected the findings of the report and called for the mayor to shut down the incinerator.  We were actually invited inside to speak with the mayor’s staff.

Though Great Lakes Law’s legal action on behalf of residents didn’t get much attention until the final settlement in 2021, years after the incinerator shut down, it was clear that the willingness of the incinerator corporation to settle was a sign that, based on the continued cost of violation fines, which state regulators finally seemed ready to fully apply, was adding greatly to the cost of operations and made burning garbage economically unviable.

The well-researched and consistent documentation, grassroots action and organizing, and a legal strategy that pressed the economics of the issue likely caused the operators to shut the incinerator down, granting residents much deserved relief, and it happened years before any of us expected.  And so when we all learned in March of 2019 that the incinerator would be closed, we were pleasantly surprised at the victory. We immediately began calling for actions to protect workers and residents through a just-transition, and though we weren’t as well organized for such a campaign, given that the haste was due to a large victory, we took some of those missteps in stride and did the best we could.

This story truly highlights the power we hold collectively to make change when we work together, think outside of the box, and use the system to dismantle the system itself. Though the fight was longer than any of us liked, our dedication to the cause never wavered, and in the end we were triumphant. The lessons from this campaign should teach everyone that keeping our eyes on the prize, using every tool in the kit, and putting information directly in the hands of our neighbors and friends works. 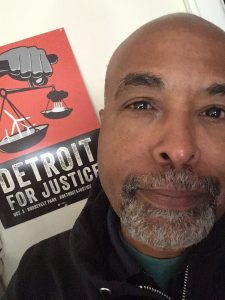 kim d. hunter is the author of the fiction collection “The Official Report on Human Activity” (Wayne State University Press 2018) and winner of the 2018 INDIES Silver award for short stories. The book’s manuscript earned him a Kresge Literary Arts Fellowship in 2012. He is a lifelong Detroiter employed in media relations for social justice groups.