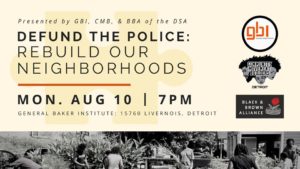 Are you a revolutionary?

Join Community Movement Builders, the General Baker Institute, and the Black & Brown Alliance of the Detroit Democratic Socialist of America for a series of neighborhood-based political education events on the movement to defund the police, defend black lives, and rebuild our neighborhoods.

We have now had Liberation Monday teach-ins at the Shed on the East Side, at Detroit is Different, at the Plaza Aztlan in SW Detroit, at Mama Akua House. This week, we will be at the General Baker Institute 15760 Livernois Ave, Detroit. The last Liberation Mondays event in this first series.

Our speakers will be placing the present moment and its demands in the larger context of the fight to end capitalist exploitation — and the violent, racist police and military tactics used everywhere to defend it.

Masks are strongly encouraged. We’ll be setting up chairs at six feet apart to comply with social distancing protocols.

Some light refreshments will be served.

Livestream will be available if you can’t attend in person