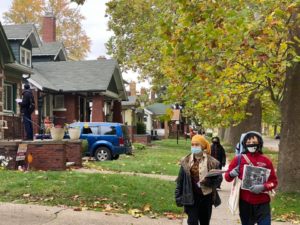 EMEAC co-director Daryl Jordan told Riverwise, “Our strategy was to go out there with all the information and make them feel like, with all the issues that we have, they had no choice but to vote.”

EMEAC youth members numbering ten or more visited Detroit districts including Brightmoor, Jefferson-Chalmers, Birwood, Barton-McFarlande, Mack-Bewick, and 48217. Despite personal encounters being limited by the ongoing coronavirus pandemic, canvassers handed-out leaflets and pamphlets where they could. Prior training and education in areas like water accessibility and environmental stewardship proved vital on several outings. During a scheduled meeting outside Ella Mae’s Soul Food near Kemeny Recreation Center, street team members engaged with environmental activist Theresa Landrum, who shared concerns about toxic emissions in the 48217 community. The prerequisite protective shields and masks played a dual role that day.

This moment of social adaptation has us moving cautiously, but the flow of vital information should not be interrupted. Jordan admits that many households were reticent, but, for many folks, having information arrive at the front door was the most effective way to receive it.

“People were more engaged because of the energy of the young people,” Jordan continues. “Sometimes the kids come from communities that we were canvassing and that was a benefit. We had to figure out how to do the most that we could in the short time we had to engage.”

At age 18, Aqelah Miyzaan is already a seasoned veteran of several canvassing campaigns with the EMEAC Youth Street Team. The Cass Tech grad spent part of early 2019 canvassing her neighborhood with the grassroots organization Breathe Free Detroit. The campaign to close the Detroit incinerator eventually succeeded, in part due to the new youth activists willing to knock on doors.

Aqelah has also canvassed with EMEAC in southwest Detroit and near the Fiat-Chrysler plant on the eastside. She says that she loves environmental causes, and knows that youth activism has its own special impact on Detroit households.

“A lot of people are happy to see us taking a stand and not ignoring, or being oblivious to, the situation,” Aqelah told Riverwise. “Even if it’s just a couple of hours, I make sure I go out.”

During the COVID-19 pandemic, small businesses across Detroit have suffered slowdowns in business, leading to decreased hours of operation or, in some cases, closure. As a result, Riverwise has focused its distribution on home mailing. Riverwise gives thanks to the EMEAC Youth Street Team for including copies of our magazine in their packets of hand-outs during their recent voter registration drive.

In this time of collective reflection and healing, young activists remain full of life and new ideas. They are learning how to be safely present in our communities. Their collective learning, commitment, and imagination is playing an important role in the changes we make as we move through this pandemic. It’s settling to know that people such as Aqelah are emerging as a vital part of shaping a new more just and sustainable future.

“I understand more now and realize how the environment is affecting us through actions that people are taking,” Aqelah says. “It’s kind of a ‘you get what you give’ situation.”