Sponsored by the Coalition for Police Transparency and Accountability

On Sunday, October 25, the Coalition for Police Transparency and Accountability held a People’s Tribunal at which members of the Detroit community testified against the long-standing oppressive policies and practices of the Detroit Police Department (DPD).  By summer 2020, the DPD had been engaged for several months in a war against Black Lives Matter protesters and their legal and medical supporters.  The police abuse of protesters was so egregious as to warrant a court order against the DPD to cease and desist. On July 10, the DPD carried out a series of violent maneuvers to disperse and arrest protesters.  On the same afternoon, a police team would assault and murder 20-year-old Hakim Littleton.  The following is an edited transcription of the Tribunal testimony offered by Paul Jackson, an activist in Frontline Detroit.

“For me, it’s been a journey of learning and unlearning… ways in which what’s truly abnormal, is made to seem normal— for people to accept abuse, accept domination, accept terror, for those people to then live as if they’re not under [those] conditions— which is truly unnatural… I’ve had to unlearn that…. A part of that is learning resistance or asserting, no, I’m a person, the people around me are people, no matter what the situation is.  That’s the floor on which we stand  —that everybody involved is a person, and that we will not do anything to compromise that ….A really sick and twisted history and narrative [has been] put on us through the educational system, through education systems that criminalize, dehumanize our babies from very early on, instilling in them a sense of white supremacy and self-hatred very early on…. No, I’m going to begin to resist that.

We seem [to be] one of the few people [nations in the world] who’re expected to accept invading armies walking up and down our streets….I mean these were automatic, semi-automatic, military-grade, assault rifles that were there at the moment of the initial contact. This is how these gang-squads arrive on your block — and we’ve heard a lot of the testimony about how anti-Blackness makes that normal, that we’re the one people on the planet who are supposed to accept that [as] our stated condition. When I saw what happened to brother Hakim, I understood that they were insisting on the abnormal as normal, the unnatural as natural. He was supposed to accept whatever fate lay in wait for his friend. What in your own life led you to resist this way of thinking?

What can you say to us to encourage the fight against police brutality, to encourage black folks to continue resisting and not accepting what’s being offered to us, but standing and offering to the world, to this country, who we are and what we are, and what we bring to the fight? 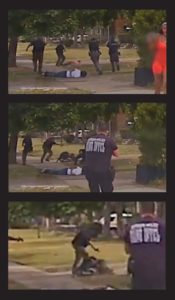 When I watched the tape

, when I saw that moment [of the execution]

— which was supposed to somehow force all of us back into this trance, this hypnosis, to set you back, to remember, that this is normal — and the lies that were being spun around it, I realized how far Hakim had come. I could see in that moment … his family’s love for his dignity. They didn’t learn — it’s obvious they didn’t learn — to love him as the lesser person, who bows down, and hangs their shoulders and gets beaten. They insisted on loving the true him… that goes from ancestor to ancestor, generations, thousands of years, the ancient that was in him, the divine that was in him.

And so, what I offer to the fight is that we begin to know ourselves in that light…. That’s what he was insisting on.  He could have gone the rest of his life as a zombie, demoralized, broken… and perhaps he would have survived and lived like many of the other people who just go along, beaten down, abused…. We’re surviving in the body, but not in the spirit of who we truly are.  And that’s what inspired me, that … he’d rather risk death in that moment…. And I also want to point out the fact that he didn’t choose that outcome. They chose it. What he chose was to stand up for a friend. That’s what I saw quite clearly:  Hakim Littleton’s insistence and refusal to abandon his own dignity and personhood and that of his friend.

We look at … people like, Priscilla Slater. If Hakim is there when Priscilla is picked up, Priscilla might be here.  If the spirit of Hakim is there to challenge and say, No, to what happens to Sandra Bland when she’s picked up, Sandra Bland might be here…. Thousands of other people, from this moment forward, because of the actions of the Littleton family to [carry Hakim’s] spirit forward, may never have to suffer that disappearance, that arrest that has no answered question, no appropriate paperwork filed, and the person turns up dead in their cell and nobody knows.

You don’t know what happens when you let your friend be taken by these criminal elements, these corrupt forces, who come through communities and harass young women, steal from people…. Young folks tell me they have had their phones stolen —  $800 phones, money taken, money they saved to pay for something for their family, cars damaged, destruction. People talk about police raids where their couches are ripped open and the TVs smashed. I’ve heard of violent sexual assault by police officers, raiding families on a routine basis all across the country where I’ve lived and organized….

People say Hakim was executed, and I would say that what happened was the climax of a very long, slow murder by a society that allows police violence in small and great ways. Police violence is not just uniformed police violence [physical assaults]. It’s the choice to take funding out of schools and to fund police and surveillance technologies. It’s the choice to close down community centers; it’s the choice to suspend Black boys and girls at incredible rates… to force them out of school … into the school-to-prison pipeline; it’s the choice to close down grocery stores and to force people to figure out how to scrape money off gift cards… ways that we’re put in the position to survive by the most slim of margins, with the least dignity left, with the least of our humanity left. That’s the slow beginning of the murder, the stranglehold, the suffocation that climaxes in this moment where you cut off, in an almost militaristic, precision fashion, any other choice that a Black person in America has to survive.  So now they’re facing the barrel of a gun, saying, either I fight or I flee. It’s very strategic.

I have to uphold, uplift, and honor Hakim because, in the face of that very dire situation, what motivated him — what they’ll never say, because they don’t understand it, because it doesn’t operate at the level they move in the world — what motivated him was love….  This was someone putting himself on the line for someone who was like a brother, [who] was being accosted by a force that could do anything to him. …

If we’re going to survive as Africans in America, we’re going to have to understand when our enemies are our enemies, and to get rid of this fantasy, this fiction, that the people who beat us, love us, that this abusive relationship with this nation is somehow good for us…. Once we get rid of that notion, and you look in that frame, [you’ll see] it’s not Hakim defending one person, but ten, twenty Hakims coming out of their houses, saying, “Take your hands off him!” I see a future in that, but until that consciousness becomes normal… we need to understand that … each and every one of us potentially has a bullet with our name on it. Until we insist … I’m an African, I’m a person, I have a future, I have value, I have a right to live, and everyone around me has a right to live, and if I have to risk that living to insist on that right… it must be done. That’s the future for me.  The future lies in the spirit of Hakim Littleton and his beautiful family here today.”