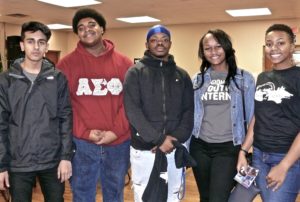 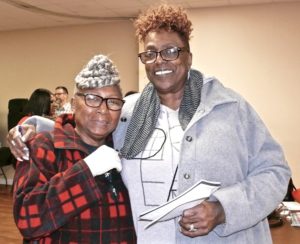 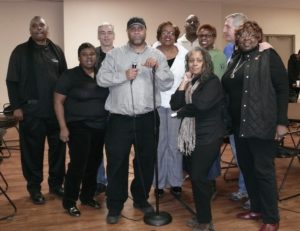 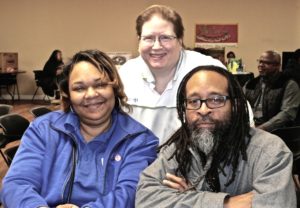 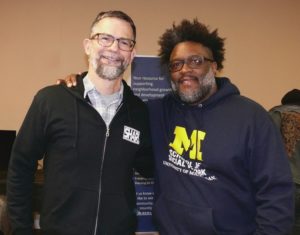 The east side of Detroit is at a critical moment. Just before the holiday season General Motors announced the closing of the Poletown Plant. By late spring, the last car will roll off the line. Less than three months later, Fiat-Chrysler
announced it would open a new plant and increase production at existing facilities, creating 6,000 jobs.

Detroiters have seen this cycle over and over again. Plants open, often flattening homes and businesses to create large-scale mass production. Then plants close, leaving behind the debris and waste of production, the despair and uncertainty of lives without work.

Can we break this cycle? Can we think differently about what it means to develop our communities? What are the values needed to create new ways of making a life? How do we think beyond jobs? They’re coming in here with their plans, but where is our plan? These are the questions emerging in gatherings being held around parts of the eastside today. They were very much the context for the January 12 Eastside Gathering at UAW Local 7 (see pictures on following page).

As these questions take on a new urgency, the community has new tools to intervene in the ongoing discussion of how should we develop our collective lives.
The first and foremost is the Community Benefit Agreement (CBA). Although the current CBA legislation is limited and designed to curtail true community input, it does acknowledge the basic fact that corporations alone cannot determine the direction of development. The legislation establishes the value that a workplace has a civic responsibility to be part of the neighborhood in which it is based.

Communities can exercise power to direct the expansion of ideals found in the CBA law in ways that move us toward more sustainable practices that develop people as well as production. We can create processes where residents and employers are thinking and acting with concerns that provide for the education, shelter, and skill development of people in ways where work is both fulfilling and equitable.

At the Eastside Gathering, the goals were to identify ways to create healthy, compassionate and loving communities that are respectful of people and the Earth that sustains us. People explored ways to make sure development happens where no one is pushed out, where no one is foreclosed, where no one has their water shut off.

The Eastside Gathering established the following areas for us to consider if we are to create a community vision that goes beyond old solutions:

1. Building an auto plant that respects green, sustainable concepts and technologies. Involve the community in the discussion and oversight of construction of the new facility to make sure that the most technologically advanced and environmentally sustainable standards are utilized.

2. Create and Establish a Community Training Institute to support the education and training of community members and school-age young people in the skills and vision of emerging technologies (solar, wind, 3D-printers, fabricators, etc.).

3. This should include training and support for members from the community to both work at Chrysler and in the building trades during the construction.

4. Create and build affordable, green energy-efficient housing in the area for both employees and current residents. Provide support to repair homes and support for people to maintain and remain in their homes. We should establish foreclosure-free/water shutoff-free zones.

5. Establish transformative Justice Center in the neighborhood that would engage with a commitment to reduce violence, provide de-escalation training, establish ‘peace zones for life’, and work with the Detroit Justice Center and other groups creating safety based upon strengthening community ties, critical connections and relationships where we care for each other.

7. Establish a Community Sustainability Institute in conjunction with a university or universities for makerspaces, fab labs, learning the technology of solar and wind trades, creating apprenticeship initiatives.

9. Establish fully accessible parks and green spaces that can serve folks with disabilities and all members of the community.

10. Support the local urban farmers and gardens to increase production, healthy education and strategies as to reduce common diseases such as diabetes, high blood pressure, and other dietary-related medical concerns.

11. Work with AMP (Allied Media Projects) to provide MESH technology so that everyone in the radius of the plant and the 2-3 zip codes have access to the internet.

12. Create a local library and historical center that captures the centuries of the east side. Long after the plant is gone, the story will continue.

13. Create a community center and/or open a gym for the neighbors and workers.

Regardless of the evolution of the Chrysler expansion, these kinds of conversations and programs are critical for us to think differently about our responsibilities to one another, our capacity to restrain capitalist expansion, and increase our concern for the Earth. This kind of engagement with neighbors can become a model for a new kind of citizenship.

Shea Howell is a community-based activist in Detroit where she has lived for more than four decades. She works with the Boggs Center, Detroiters Resisting Emergency Management and Detroit Independent Freedom School Movement. She writes a weekly column, Thinking For Ourselves, is a professor of communication and a member of the Riverwise editorial team.