The lessons of the last decade and a half fighting for a real Water Affordability Plan (WAP) in Detroit may shed some light on what’s ahead for the Green New Deal in its attempt to reverse our global industrial death march. 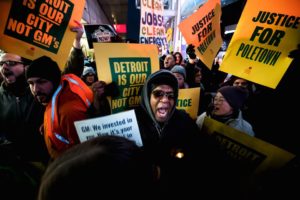 For 15 years grassroots social justice activists in Detroit, organizing under the auspices of the Michigan Welfare Rights Organization, the People’s Water Board, and We the People of Detroit, have advocated a “Water Affordability Plan” that would reduce water and sewer rates for people living in poverty to about 2% of gross household income.

United Nations human rights officials have castigated Detroit’s water department for violating the fundamental human right to water and sanitation by inflicting mass water shut-offs on people who are unable to pay constantly rising rates. Researchers from Michigan State University report that approximately 10% of residential customers currently cannot afford to pay the rates, and that if we don’t make sufficient changes soon to our unsustainable rate structures, that number will rise to about 30% in the next decade.

This is the cold, brutal face of austerity. With the children of neighboring Flint having been so recently and unconscionably poisoned by the State’s undemocratic, white supremacist “emergency management” policies—and approximately half of Detroit in a condition of deep water insecurity, fearing shut-offs from month-to-month—the need for new policies to ensure water equity, security and affordability could hardly be more obvious to those not in thrall to the deadly neoliberal mindset. Enter the “Green New Deal.”

On February 5, 2019, Rep. Alexandria Ocasio-Cortez (D-NYC) officially introduced the Green New Deal (GND) as a formal resolution in the U.S. House of Representatives. The document begins by summarizing some of the most recent, apocalyptic findings regarding the effects of climate change on the Earth’s natural systems, human communities and economies. It appropriately calls out “several related crises,” including declining life expectancy, economic stagnation, and skyrocketing income and wealth inequality. The Green New Deal proposes stimulus to the economy via living wage work on green jobs that will save the planet from climate catastrophe and related industrial plagues.

Opponents immediately criticized the GND for being somewhat vague in terms of concrete policies. This is perfectly understandable. There’s no clear, fully drawn road- map that might lead the white supremacists of a capitalist, patriarchal, industrial system to structure a more humane economy that would support rather than threaten human communities and the integrity of the biosphere.

The resistance to the Water Affordability Plan by the Detroit power structure might shed some light on what’s ahead for the GND in its attempt to reverse our global industrial death march. Activists in Detroit are still fighting after a decade and a half for justice regarding our water; and the Sunrise Movement youth who sparked the GND are today being attacked by bipartisan corporate political shills because such revolutionary reforms meet real human needs by taking social power from the elite and giving it to ordinary people.

Neither the GND, as a global climate/environmental apocalypse survival strategy, nor the WAP, as a local water equity and security measure, is impractical in any technical sense. The GND and the WAP reframe essential social services not as privatized, corporatized, “run-government-like-a-business” enterprises, but rather as essential components of our communities’ lives and, indeed, of our humanity. To “the 1%” who effectively determine virtually all major policies, these innovative strategies mean their loss of the ability to govern and profit from “their” systems of economic power, political control and social/cultural domination. Thus the determined resistance.

The GND, at this preliminary stage of its public existence, is simply a broad directive to where human society should start heading now if collective survival is important to us. So many blanks will need to be filled in—by movement actions, sensible temporary political compromise, trial-and-error, stepping up to meet new challenges, and a million other creative interventions that are impossible to predict at this time.

To get from the point where such a brilliant reform is devised and publicly announced, to where it’s adopted and implemented by government, is the hard part of the work. It necessarily requires bridging racial and other painful social divisions; turning up and keeping the heat on entrenched political economic powers; building people power that can withstand the willful lies of untrustworthy paid “experts” protecting the injustices of the status quo; and ultimately transforming ourselves, as well as our communities and governments, from capitalism to the commons.

Most fundamentally, both the WAP and the GND mark the crossroads where we are all standing at this time. There must be reforms that ensure clean water for entire communities and regions, stated in more fundamentally equitable terms of democracy, public health, social justice, human security and dignity. A tall order, but if there’s any hope of a human future in the “anthropocene” era recognizable to those of us born and raised in a holocene world, these changes are absolutely imperative, not only for our hydration, but for our work, education, shelter, transit, public health, food, media and virtually every other aspect of our lives.

As eloquently noted by the authors of a recent in-depth report on Detroit’s water and sewer policies by MOSES (Metropolitan Organizations Enabling Strength), the Haas Institute and Praxis Partners, we can either continue on our present policy path, and experience continued and intensified, decay, inequality, climate disasters, environmental degradation, water unaffordability, and violation of human rights, or we can start on a new path via policies like the GND and the WAP, toward energy and ecological transformation of our unsustainable and dangerous systems.

It’s often been said that it’s easier to envision the end of the world than the end of capitalism(1). Current efforts to pursue a Water Affordability Plan and the Green New Deal demonstrate that in the face of threatened annihilation by capital, lots of smart people are developing visions of new ways for us to live on the planet. That’s the only hope we have.
As a few thousand of us yelled while marching in Downtown Detroit streets in 2014: “FIGHT, FIGHT, FIGHT! WATER IS A HUMAN RIGHT!” And so is the Green New Deal—in all its visionary, complex, and uphill battle-demanding glory.

(1)This point is alternatively attributed to both Fredric Jameson and Slavoj Žižek. Naomi Klein has similarly said of global anthropogenic climate change, that “This changes everything.” For the sake of both the Water Affordability Plan and the Green New Deal, I hope she’s right.

Longtime Detroiter Thomas Stephens currently does organizing and legal work for Detroiters Resisting Emergency Management. He has served as policy analyst for the Detroit City Council Research and Analysis Division. He previously worked as a trial lawyer, litigating cases related to environmental justice and civil rights.