The ‘North End Urban Expressions Art Festival: The Healing’ is more than just a neighborhood fair. It’s a cultural harvest for grassroots organizing work after a long season of community-building throughout the fields lining Oakland Avenue. The outpouring of creativity, history, and unity on display during the event acts as an affirmation of the work done to uplift the community. According to festival organizers, it’s an expression of the collective healing that occurs when people organize for self-determination.

The first Healing Festival occurred seven years ago in the North End at the Oakland Avenue Farmers Market. Event organizer Jamii Tata joined Riverwise to explain how, since 2013, the Healing Festival has evolved into a multi-faceted event which emerged from holistic community organizing. Always at the top of the list, according to Tata, was organizing the people in the neighborhood by harnessing their creativity and collective insight.

“We had a whole bunch of different elements in that first healing that came from a lot of conversations in community, a lot of things that were on the community’s heart,” Tata told Riverwise. “One of the things that’s really beautiful about the first festival that lent itself to the program, as part of the OAAC (Oakland Avenue Artists Coalition), is the number of assets in the neighborhood, that were not seen as assets, that we were able to lift up, including the people.” 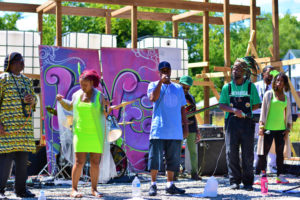 The Healing Festival offers vendors who promote and sell products focused on health and wellness such as reiki healing, acupuncture, medicinal herbs, and tinctures. But where Tata, the OAAC and countless others have really succeeded is in defining all the creative work being done in the neighborhood— growing food, creating furniture, rehabbing storefronts, painting murals— as a process of collective healing. Community-building in all its components, artistic included, becomes the healing itself. Thus, the Healing Festival emphasizes self-expression and culture through music, poetry, West African dance, and food grown in the neighborhood. It’s a vigorous display, by the people who are fully engaged in the process, of the transformations of the preceding year.

“If we acknowledge ourselves, that in itself is a healing opportunity for us,” Tata told Riverwise. “This is broadcasting in the larger sense of like, people are here, who are creative and who are vibrant. This is not a desolate area with nothing— we’re not the thing after MidTown, we’re not the thing near TechTown. We are a neighborhood that has a rich history and legacy that spawns MoTown legends of the past to hip Hop artists and visual artists of today.”

During the 1940s and 50s, Oakland Avenue was one of the most bustling business districts in the region, bolstered by a vibrant Black entertainment district. According to Tata, economic activity along the thoroughfare was so dense that houses often set up little businesses, like barber shops, on the side, where there was no designated business space available. From the beginning, the Healing Festival has incorporated the stories of Black economic success on Oakland Avenue, providing an opportunity to pay homage to the artists of yesterday while uplifting the youth artists of today. The history also provides a stronghold for residents, especially longtime residents, against external forces coming in with their own ideas about what constitutes a neighborhood available for development. Our neighborhoods, no matter what the current material condition, become more valuable when we understand the history and what social forces existed there previously.

“If the institution is more knowledgeable than a neighborhood about its history, then the institution will be the shapers and change agents of a neighborhood,” Tata says. “One of the things we wanted to make sure of is that, that didn’t happen in our neighborhood, no matter what the institution was. So for us it was an opportunity to, if folks didn’t know the rich history of Oakland Avenue, it was our responsibility to be like, yo, this is what happened. You should know about that. But you should also know that what you’re doing now is also what has been done.” 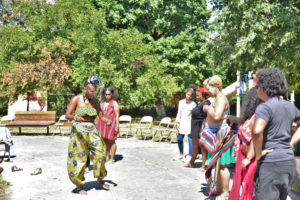 Urban agriculture has long been a prominent part of community building in the North End, from the Oakland Avenue Urban Farm to other smaller plots that pepper the neighborhood. The first several Healing Festivals were held at Oakland Avenue Urban Farm and Tata’s organizing work grew through a food security lens. That tradition has remained while newly built structures like the Oakland Avenue Pavilion— a multi-purpose stage with a rain catchment system— act as physical reminders of how folks in North End are reclaiming the land, and restoring themselves in the process.

Says Tata: “We started the Healing Festival, the first five years was at Oakland Avenue Farmers Market, cause we also wanted to let people know that, even though this neighborhood doesn’t have a grocery store, that doesn’t mean we’re food insecure. We have food and you shouldn’t say this is a food desert; you shouldn’t say that there’s no opportunity to grow food or get food because there’s folks growing food. And then there’s this beautiful market that happens every Saturday you should know about. It’s a community asset. So this Festival is also an opportunity to highlight assets in the neighborhood that no one really knew about.” 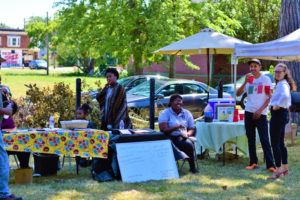 The North End Healing Festival started as a hub to exhibit all the social and economic injustice work in the neighborhood through the visual and performance arts. Seven years later, it has evolved into an opportunity to create a grassroots economy with a focus on art and culture, that can sustain us as human beings.  Supported by neighborhood initiatives including the Oakland Avenue Garage, the Oakland Avenue Urban Farm, Red Door Digital, and the KAN Coop Bookstore, the Festival is now an organizing tool in its own right, building community from a holistic perspective, relying on the many resources found inside the neighborhood.

For more information on the ‘North End Urban Expressions Art Festival: The Healing’ and the many cultural initiatives emerging in the North End, visit http://www.oaacdetroit.org/.