Of course, we cannot say that Kyle Rittenhouse is guilty.

Because this is America.

And he is presumed innocent until proven otherwise.

But for what it’s worth, he is White.

And slightly older than my two teen Sons

Depending on the viewer,

Kyle is/was 17 when he shot three protestors in August 2020:

Looking to be helpful.

With fire in arms.

His daddy has yet to be publicly identified.

There are no reports that his father’s last name is Zimmerman.

Trayvon was 17 when his breath was forcibly expired.

If he could, Kyle would have flown to Kenosha.

All cherub-faced, green-eyed, and rosy-cheeked.

People are defending him.

I am sorry for that

But there are people who have donated to Kyle’s defense:

And it strikes me

That again we’re seeing the Cupidization of another White boy.

They go around shooting

Just for daring to be.

Before or during or after the slaying

To counter the weight of the heavy they just did.

Mounting a pre-defense against the graves others will dig.

It remains to be seen

whether Kyle will be convicted

and/or given a Holy Day.

His mother may wear red in his honor.

Hand out dark chocolate from her porch 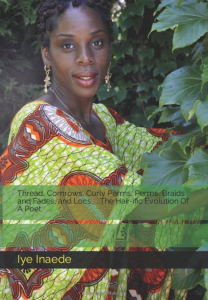 For more powerful works of poetry by Iye Inaede, check out her new book Thread, Cornrows, Curly Perms, Perms, Braids and Fades, and Locs… …The Hair-ific Evolution Of A Poet. Available on Amazon.

Riverwise would like to humbly apologize for the misspelling of Iye Inaede’s name in issue 18. Her first name was incorrectly printed with an “L” instead of an “I”. We know that proper representation matters and we want to ensure that Iye is given the full acknowledgement she deserves. Forgive us!