In gloomy and despairing times, we who work for liberation generate light and joy. We experience this every time we work together to defend our communities, when we fight to win collective victories, when we build something new. Much of the time these experiences are in marches and meetings – really important spaces for movement work. But here we want to amplify the usefulness of collective study, and share some thoughts about why Harsha Walia’s new book Border and Rule would be a great place to start if you might like to try a political kind of book club.

Non-political book clubs are places where people get together, outside of school, to talk about something they’ve all read. They’re fun, or edifying, and usually there are snacks. Maybe not everyone has read the book, or finished it, but they come anyhow to talk with friends. Often book clubs have a closed and ongoing membership. The study circles we’ve been in are explicitly political, had open registration, and had a limited run-time. So they have some differences, but share being collective spaces where ordinary people can talk together outside of school.

As PG reminds us in their reflection on study circles, studying is a political choice that folks are making as part of their commitment to liberation. Study is wonderful for so many reasons, many of which express political commitments the Boggs Center exemplifies (it’s no accident that they hosted the study circles we’re reflecting on here). Study is one way to envision the kind of society that we’re trying to build, rather than just reacting against existing conditions. Through studying movement histories and learning about present work, we nourish our capacities for visionary, place-based organizing. While we still respond to crises, study circles offer time to reflect on how to bring the future we long for into the present.

As we work to dismantle oppressive systems “out there,” studying together is an important way of engaging in inner work. We know that it is not only our actions, but our ideas that matter. And we agree with Jimmy Boggs when he emphasized that, “ideas are life-and-death questions, and people oughta struggle over ‘em.” Study circles open opportunities  for us to  recognize and respond to contradictions within and among ourselves. Building caring, trusting relationships through collective study also aids us in developing our capacities for building the beloved community. After all, how we go about sharing, explaining, challenging, and building upon each other’s ideas through conversation matters every bit as much as the ideas themselves. Encouraging one another to ask the questions that need asking, and issuing and responding to challenges in loving ways, are examples of skills that require time and practice. Nurturing each other in and through conversation, we deepen our relationships and build the trust we need to work together over the long haul. 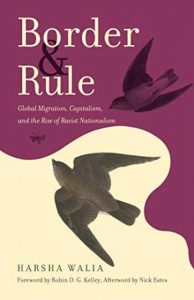 Border and Rule is a great political choice for a study circle, even for folks looking to organize their very first. Though the book reads well on its own, we also created this wonderful study guide, found here: bit.ly/borderrulestudy which includes links to videos, podcasts, and other ways of engaging with the book’s main ideas. We wrote this study guide not only for what it could do for the people gathered in our own circle, but as an opportunity for people to experiment with this movement-building practice in many other places. We would love to grow a whole library full of study guides to facilitate more study for struggle!

Border & Rule focuses on a global, international crisis: the formation and enforcement of borders, understood as spatial and material power structures. Walia offers an uncompromisingly internationalist analysis of the “migration crisis,” which she helpfully reframes as “a dual crisis of displacement and immobility organized through capitalist dispossession and imperialist power” (62). As she points out, “Language such as ‘migrant crisis,’ and the often-corresponding ‘migrant invasion,’ is a pretext to shore up further border securitization and repressive practices of detention and deportation. Such representations depict migrants and refugees as the cause of an imagined crisis at the border, when, in fact, mass migration is the outcome of the actual crises of capitalism, conquest, and climate change” (3). As Walia shows, borders are everywhere, and they affect all of us. Whether we are someone displaced by war or climate catastrophe, or someone who lives comfortably with citizenship status, borders shape our lives. Even if they seem to benefit us, all of us have a role to play in ending the violence of borders.

The project of Border & Rule is principally critical and diagnostic. But Walia’s writing invites us to think big, to imagine a world beyond current social relations of oppression and benefit—beyond ruling relations characterized by nation-states, borders, imperialism, and police. She reminds us that we’re also within relations of liberation that we experience and know. And she pushes us to consider what sovereignty looks like beyond the nation state, turning our attention toward boundary-setting practices that resist solidification into death-making borders. Her analysis of the function of borders in the context of settler colonialism and the slave trade holds invaluable lessons for those of us working to liberate territory within the confines of existing states. Beyond a merely negative response to politics, this approach to liberation helps us become what Grace Lee and Jimmy Boggs thought of as “more human human beings” – people who create a world in which everyone thrives.

The structural violence revealed by Border & Rule might strike us as intimidating, grim, or heavy. Borders really are awful! But ignoring how bad things are doesn’t do any of us good, nor does it help us make the changes we want to see. Instead, we can learn, talk, and strategize about the hard stuff together. When we do that, we strengthen our commitment to building liberated spaces in ways that foster global consciousness and solidarity. None of us can solve these big problems alone, but we definitely can confront and solve them together. We found that meeting the weight and horror of current border violences as a collective project helped us fan the flames of liberation through the joy of studying together. If you think you might want to do the same, this book is a great place to start spreading the light of that flame. So, gather your friends and comrades, have a look at the study guide we’ve put together, check out Border & Rule, and let us know how it goes!

Bios: Alexis Shotwell teaches and writes in Ottawa, on unceded Algonquin land, where she’s a part of the Punch Up anarchist collective (punchupcollective.org).

Mike Doan is a member of the Transitional Leadership Team at the James and Grace Lee Boggs Center to Nurture Community Leadership. He is also an Associate Professor of Philosophy at Oakland University.