After the tragic shooting at Oxford High School on November 30th, 2021, hundreds of schools across Michigan received copycat threats that caused them to cancel school, enter lockdown procedures for hours, or abruptly send kids home. Although school shootings have become almost commonplace in this country, the overwhelming number of copycat threats was new and surprising – over 140 were investigated in Oakland County alone.

The Detroit Free Press reported that over 85 arrests have been made, with charges ranging from inciting terrorism to disturbing the peace. Arrests included kids as young as 11, likely landing most harshly on Black and Brown children – even though the vast majority of school shooters are white. Authorities are hoping, desperately, that mass arrests will quell the copycat threats and keep schools open after the messy year of opening-and-closing due to Covid surges. They might succeed in intimidating kids into silence, but no one seems to be asking the most important question: Why are kids doing this?

Police in that Detroit Free Press article shrug their shoulders and say, “Kids made these threats to get out of school.” Are we really content with that explanation? That school (or life) is so awful, miserable, and unavoidable that kids feel the need to resort to violence to get a break?

Instead of asking these deeper questions, many adults are clamoring for metal detectors, bag searches, and increased police presence – even those who were shouting to defund the police a few months ago. These adults point to the near non-existence of school shootings at urban schools that serve primarily Black and Brown students as an example. Those young people don’t fear school shootings, they claim. Their schools have metal detectors, why would they? 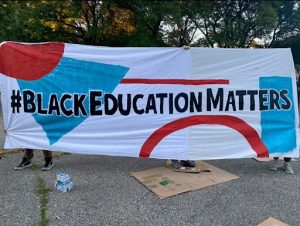 But, studies have shown that metal detectors don’t actually prevent students from bringing weapons into school. They may displace some violence to parks, malls, and birthday parties – but they don’t make us safer. Young people in Detroit know this. In fact, between 24% and 87% of them have already experienced gun violence. Students in these heavily surveilled districts have shared that metal detectors are often broken, bag searches are cursory at best, and police are more of a threatening than reassuring presence. Certainly students feel watched, but that doesn’t make them safe.

This dynamic was even more present at Robb Elementary School in Uvalde, Texas, where they have an entire police department dedicated to their school district. Terrifyingly, some studies indicate that these kinds of “hardening” efforts actually lead to higher death rates in schools with armed guards and metal detectors, because attackers arm themselves accordingly. But the illusion of safety acts as a convenient excuse to avoid any conversation about the 14 million students in the United States who go to schools with police but no mental health professionals.

In fact, one of the most tragic and upsetting things about the shooting at Oxford High School, is that the school (or at least the students) knew about the danger ahead of time. They didn’t need metal detectors to know there was a problem, students repeatedly told the school that they didn’t feel safe. And Oxford High School’s administrators did not fail to act, as many have claimed. They took action immediately – by telling students their fears were misconstrued, exaggerated by social media and gossip, and to get back to class.

This “get back to class” attitude towards students is exactly what we are replicating through arrests and surveillance: students are not worth listening to about their struggles, don’t know what they’re talking about, and are irresponsible and unreliable. Anything they do or say, especially on social media, can be shrugged off as wanting to avoid hard work. Even when they plan mass walkouts to protest gun violence they’re accused of “just” wanting to skip class.

Having personally fielded literally hundreds of texts from students across Metro Detroit on that horrible week in November, one thing became clearer than ever. Before there were ambulances on scene, vigils, or legislative proposals, young people were each other’s, first responders. They were texting each other in a dizzying blur, sharing their experiences, fears, and support. They were commenting on social media posts, distributing information, and processing each new threat together. Adults – myself included – could barely keep up.

It reminded me of the early days of the pandemic when Detroit Area Youth Uniting Michigan (DAYUM) convened the Covid Youth Taskforce – a for-youth-by-youth mutual aid initiative to support students stuck at home during the lockdowns. We used this task force to distribute over 200 care kits, stuffed with everything from PPE to art supplies, and to coordinate virtual social events that kept many young people grounded in community during that difficult time. As the young people observed, it shouldn’t have been up to teenagers to take care of each other in this way, but no one else seemed interested in doing it. School administrators, legislators, parents, and even teachers were wringing their hands over “learning loss” while young people were rolling up their sleeves. 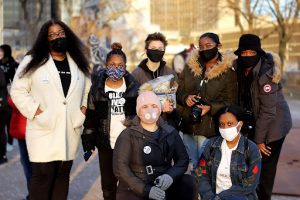 These young people, who have come of age during a pandemic, experienced gun violence, and are facing everything from climate collapse to student debt, know more about navigating times of fear than any of us. Far from avoiding hard work, they are the ones starting the conversation and showing us how utterly intolerable our current situation is. If hundreds of young people across Metro Detroit needed a break from school so badly they’d risk a felony conviction for it, how bad must things be? We have to stop dismissing these actions as individual pleas for attention or “bad apples” and start to recognize that something much deeper and far-reaching is going on in our schools.

Listen to Get Schooled Here: https://open.spotify.com/show/6tM3XodI4Jh8sTqkFp7spp?si=eea7c441a6d54332

In DAYUM, we anticipated this kind of mental health crisis in schools long before the Oxford shooting. In fall of 2020, when schools decided to re-open virtually, we created The Online Learning Bill of Rights, to push for equity and student voice in online learning plans across districts. We told the Michigan school board and superintendents that if they didn’t act immediately to focus on mental health support instead of test scores, kids were going to start melting down. Many districts claimed they would, but all they did was distribute the suicide hotline number and tell kids to go back to class. It’s not enough. While some young people will channel their pain and frustration into fighting for collective liberation, others are going to react with violence.

Future historians may view the unprecedented wave of gun threats last semester as students engaging in a kind of individualized resistance. Absent any other effective means for making their voice heard, they’ve resorted to threats of violence. Oppressed groups throughout history have done the same, forcing authorities to respond to their grief and rage. There’s much to learn from young people today – those who make threats and those who support each other through trauma and violence. Both are demanding change, but are we listening?